The Reality of Virtual Reality

Virtual reality (VR) has advanced dramatically since the days of flight simulators used by the military.  VR is currently available in three different types: by placing a helmet over your head to experience a 3-d reality, BOOM - binocular omni-oriented monitor, and a VR theater that the user moves through.
Below is my tetrad on virtual reality. 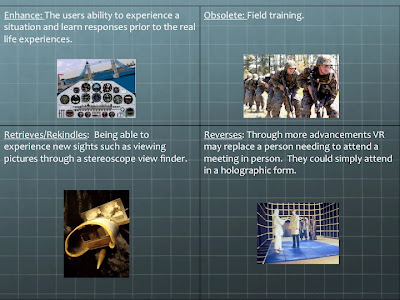 No, it isn't the lasted slang word from urban dictionary floating around the halls of your local high school.  YouTwitFace is the result of a joke at a dinner party reaching the mouth of Conan O'Brian and then going viral in the summer of 2009.  YouTwitFace will be a website where all of the great aspects of YouTube, Twitter, and Facebook are all rolled into one website.  According to Conan in the year 3000 these three webistes will combine to create one giant time wasting website known as YouTwitFace.

There is no question that YouTube, Twitter, and Facebook are three of the largest wasters of employees time.  The question is, what is it about these three websites that people enjoy so much?  The ability to watch entertaining short videos?  The ability to follow friends and celebrities in 140 characters or less?  The ability to update the entire world on the fact that you are wasting your employers time while tending your virtual farm?  Yes, these are three reasons why people are drawn to these three websites, the question now is how to get YouTube, Twitter, and Facebook to be a part of students time while being on task at the same time.

David Thornburg, an award winning futurists, stated (2009) "If we who care about education truly take the time to examine emergent technologies, we can perhaps anticipate some of the changes that can take place in our schools to help students learn more effectively.  The sooner we know what may be coming down the line, the more time we have to think about the implications of these technologies, and to plan on their eventual adoption when they do come to the market" (p. 2).  It is clear that YouTube, Twitter, and Facebook have emerged and become a regular part of our daily interactions with technology.  The challenge with these three websites is not figuring out educational aspects that can be included in the classroom, the challenge is the fear of coming across material that is not appropriate for students.  In response to coming across inappropriate material on these three very public websites, similar services have been created that offer social interaction with an educational focus.  Edmodo is a social media website that looks and feels similar to Facebook, but with the protections that a teacher needs.  TeacherTube is a educationally focused video website that is similar to YouTube, but again with the safety protections that a classroom needs.  Twitter can be an educationally safe resource as long as the students create accounts specifically for class and are only subscribed to each others tweets.

Between TeacherTube, Edmodo, and Twitter a teacher can create a safe environment where students can interact using social media.  Through including these three websites into the daily classroom a teacher can demonstrate to students that these types of websites are not just for entertainment, but can also be used to collaborate and interact in way educational ways.  It also demonstrates a unique way to stay connected with each other, as well as provide a different way to share ideas with each other.  These types of connections through the Internet are the types of connections that businesses are trying to create and want their future employees to be able to participate in.

There are several ways that these technologies could be improved.  One improvement would if these three services all being replaced by one website, like the fictitious YouTwitFace.  One website would mean one username and password that the students would need to remember, as well as the ability to access all of the resources in one place.